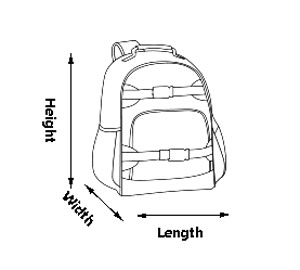 How To Measure Backpack Size

1.Measuring the volume of the bag, which tells you how much it can hold. The volume of a backpack is measured using cubic inches or liters.

Your little superhero is ready to tackle any adventure equipped with this ultra-cool, durable backpack! It’s crafted with sturdy zippers and straps, plenty of pockets and playful dc marvel superhero-themed details. They’re ready for any superhero adventure!

Kids love superheroes. The image of a larger than life hero, who selflessly gives up his time and effort in keeping the world free of villains leaves them awestruck. Superman, Batman, Spiderman, He-man, and other popular superheroes, are all a hit with the kids. PKAWAY® The trademark is registered in the United States.Our company are expanding our business internationally, such as Amazon Global Selling. With operations in ten international marketplaces — the United States, Canada, the U.K. Germany, France, Italy, Spain China, Japan ,Singapore, Australia ,The United Arab Emirates and India — and customers in nearly 180 countries, the e-commerce giant connects retailers to millions of customers worldwide. Numbers also point to its strong performance as an international marketplace.