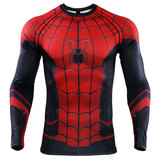 This winter soldier compression shirt for workouts is inspired by marvel avenger movie: Captain America Winter Soldier, dress up like a superhero

Bucky Barnes appears as the Winter Soldier in Marvel Future Avengers, voiced by Masayoshi Sugawara in Japanese and Yuri Lowenthal in English. Sebastian Stan will reprise his role from previous Marvel Cinematic Universe films in the upcoming Disney+ limited series The Falcon and the Winter Soldier.

Why does everyone love Bucky Barnes?

So to sum up, why I love Bucky Barnes? It’s simple. He is loyal, he is loving, and although he has suffered immeasurably, he manages to stand his ground, and be the man he chooses and wants to be. He’s a true hero.

Is the Winter Soldier good or bad?

While Winter Soldier eventually ends up on the side of the Avengers and many other famous heroes, it’s surprising that he was given a second chance after all of the crimes he committed. … Winter Soldier is an anti-hero who will always be running from his past.