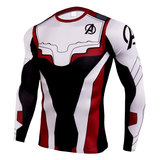 Dress to impress in the quantum realm suit donned by the super heroes saving the world in Marvel’s Avengers: Endgame. This all-cotton costume tee is perfect for keeping comfy on rescue missions.

This Cool Quantum Realm T Shirt For Marvel fans, dress up like a superhero!

Everything we know about Marvel’s Quantum Realm and its importance in Avengers: Endgame

Our Marvel Cinematic Universe heroes had a big quest in front of them in at the opening of Avengers: Endgame – to reverse Thanos’ Snap, which erased half the population of the universe at the end of Infinity War.

The prevailing theory was that the mysterious Quantum Realm would have a major part to play in restoring the lives lost to the Infinity Gauntlet. But what exactly is the Quantum Realm? And what importance does it have in Endgame and the future of the MCU?

This is your last chance to turn away from the spoilers.

What is the Quantum Realm?

The Quantum Realm is a dimension that exists below or within our own. It can be accessed by shrinking down to subatomic sizes, and so is understandably linked to Ant-Man, who uses Pym Particles to reduce or increase his size.

In the first Ant-Man film, Hank Pym warned Scott Lang not to shrink down too far, as he could get lost in the Quantum Realm forever. Hank knew the risks well, as his wife Janet van Dyne (the original Wasp) had vanished into the Quantum Realm years earlier.

Doctor Strange director Scott Derrickson also revealed that the Quantum Realm can be accessed by magic.
Ant-Man and The Wasp confirmed what the first film had hinted at – that it was not only possible to return from the Quantum Realm but to survive down there for years. The sequel saw Hank complete a mission to bring Janet back to Earth by traveling through the Quantum Tunnel he had invented.

But Janet has been altered by her time in the Quantum Realm, acquiring new powers – including healing abilities – that we don’t know the full extent of yet. “This place… it changes you,” she told Hank when they were finally reunited. “And adaptation is part of it, but some of it is… evolution.”

Before Scott returned to the Quantum Realm, Janet warned him: “Don’t get sucked into a time vortex. We won’t be able to save you.” A throwaway line, perhaps, but it hinted at the secret potential of the strange dimension…