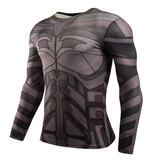 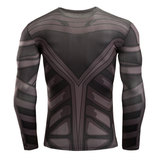 Batman is a fictional superhero appearing in American comic books published by DC Comics. The character was created by artist Bob Kane and writer Bill Finger,and first appeared in Detective Comics in 1939. Originally named the “Bat-Man,” the character is also referred to by such epithets as the Caped Crusader, the Dark Knight, and the World’s Greatest Detective.

Batman Gym T Shirt,dri fit long sleeve marvel compression shirt, You can be your own superhero too with the right quick dry gym shirt to help strengthen your body. Well, okay, we admit that you can’t necessarily obtain marvel superhero strength, but you can wear your favorite superhero exercise shirt to make your upper body workouts even more effective. Choose either short sleeves or long sleeves to wrap and support the sections of your arms and chest, pumping oxygen inside those vital organs. You may not be able to become a superhero, but you can certainly feel like one after you’re finished!